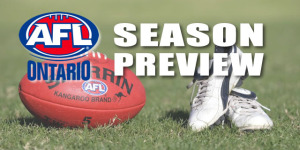 It’s hard to predict what will come of the AFLO 2017 season. Football in Toronto has a transient nature, which often lends itself to players coming and going annually which can shift a playing list from premiership contender to cellar dweller. Remember, too, the AFLO 12-week season is relatively short and has a Summer schedule. Getting a good read on teams doesn’t usually happen until finals but along the way we start to compile notes and study the wins and losses and sure enough the form teams rise to the top.

In 2016 the Rebels claimed the premiership, their first in 15 years, going 11-1 and boasting the best attack in the league with 174 goals. You would assume they are going to push for a tilt at back-to-back flags this year, but history warns us that most AFLO teams struggle to stay at the top for long periods. The fact that in 2015 the Rebels went 6-5, after a 12-0 season is one example of the difficulty in keeping good lists intact. This has happened to the 2013-14 back-to-back Hawks who have gone 8-15 since then.

This season we’re going to look at all the teams, their fortunes, and try to predict their future. We’re going to take historical knowledge into consideration as well as their 2016 successes and failures and current playing stocks. I’m pretty sure none of these predictions will work out because football is just so erratic, but we’re going to do it anyway and crystal ball this season.

Here’s every AFLO team and their 2017 outlook (in no particular order):

Rebels: Like every reigning champ, the glory of claiming back-to-back flags is always the dream. Will 2017 be that kind of season for the Rebels, or, is their “off” year. The Rebels will be looking to Digga Stubbe for leadership and excellent decision-making. Rob “the kid” Tersigni will be looking to build on last year’s solid season add more goals to his name. And with Steve Verzyden roaming across halfback, the black and white army look set to defend their AFLO crown in 2017.

Swans: The boys from O-town will be hurting after last year’s Grand Final loss. Historically, they’ve been one of the best teams over the past three seasons going 28-8. Haven’t heard much from that part of Ontario, in terms of movement, but rest assured they’ll be gathering any loose ends from Quebec City and Montreal to form another finals-hardened team, which should mean another shot at the title this season. They’re so close to winning their first ever AFLO Premiership, you can smell it.

Wildcats: Last year’s Preliminary Final in Ottawa was always going to be a tough ask when they fell short by 41-points. It was a massive step forward for the club who had struggled to put wins on the board for three seasons leading up to last year. They went 3-31 in that time, so you can only imagine what it felt like to make a Preliminary Final. In 2017, the Wildcats have added a good mix of Australians and Canadians in Tim Groenenberg, Tom Sally and Jeff PC. Add that to last year’s list and you have to believe that the club has well and truly turned a corner and should lock in a finals spot.

Roos: Word from Etobicoke is that they’ve lost 18 players from their 2016 list, through injury, retirement and relocation. But not to worry Roos fans, all is not lost. The latest is that Bendigo boy, Justin Moore, will coach, play half forward and lead the club out of the quagmire. The Roos have also added two other Australians who will fill the spine: backman Jake “Sloth” Coldebella and speedy on-baller Cade “Meatball” Waters. Let’s not forget the great man Justin Harris who booted 56 goals in 2016, plus a slew of Eastern Europeans, starting with new skipper Riyad Karacic, Kerim Karacic and Kosta Drezgic. It’s never easy to lose 18 players, but, I think the Roos will be OK.

Eagles: Azza’s Boys have been able to compete most years with or without a full squad and that’s what makes them dangerous. They had the sixth-best attack in 2016 with 118 goals from 217 shots on goal. Falconi bagged 40 of them. The aging Eagles have provided gritty contents in their twilight careers, but one gets the feeling a huge turnover in playing stock is coming. Word has it they’ve rustled up some key Australians, which should compliment their Canadians. Most years their Aussie stock has been quite good and my gut feeling tells me the Eagles could be battling the Roos for a top four spot this year.

Blues: Sean Goedheer and Chris Daws hold the key to the Blues success in 2017. Last year the pair added 34 and 25 goals respectively, despite going 4-7. The Blues were Grand Finalists in 2014 but have slipped off the radar in the past two years. With Jackson Ward and Kyle Docherty lurking, the Blues only need to make one or two quality additions to up-the-ante.

Demons: The Demons have gone winless in the past two seasons and have a record of 2-33 over a three-year period. But something has to give. By the looks of things the Demons have been active with recruiting and if they can add a couple of more ball winners to feed Trent Silvers (if he’s still around), then 2017 could be filled with promise. My take is: if the Wildcats can break the cycle of ugly seasons, the Demons can too.

Dingos: There’s been a changing of the guard at Dingoland, which started in 2016. Last year the red and black just made finals but were ousted in the first knock-out final against the Swans in Ottawa. There’s no more Wade Edwards, Tom Humphries, Tom Evans, Alex Aitken or Mitchell Stewart. But new skipper, hardman Mike Bocian, will be leading from the front at full-back along with new Australian recruit Timothy Indian. Assistant coach and Australian midfield-forward Justin Davis will look to add more goals to his AFLO resume. And the competitive Rob McNaughton, who is one of the best contested grabs in the league, will want to eclipse his 2016 goal tally of 27. There’s a lot of new moving parts to the Dingos in 2017 who will provide similar output to last year. Whether or not they can go a few better is something we’ll have to wait and see.

Hawks: The Hawks say they are in rebuild mode, but they’ve managed to add a handful of new Australians to the Dullard-Shuttleworth Show (still the best duo in the competition) which will help the transformation back into a contender. The twin towers will have their work cut out for them in 2017, but they also have a new former English rugby recruit who goes by the name Jimmy (kind of like how Beyonce is just Beyonce) and will add grunt and hardness around the packs. Hasan “Axe” Akbar and Taylor “Taytay” Mason are two more to watch out for as the season progresses. The Hawks had a tough 2-10 season last year, so be wary of a war-torn club with battle scars.

Gargoyles: Another team that has declared they are in rebuild mode in 2017. Considering they’ve just missed out on finals in the last two years, with a youthful Canadian-heavy squad, the Gargs are definitely one team to keep an eye on. A few key Australian additions could turn their fortunes around quite dramatically. This year they’ve added a former soccer player in Branislav Sisljagic, Australian forward Nathan Couldridge and Canadian Josh Burr. International Cup player Jacob Martin will play in the middle this season, which will be exciting to watch and prolific forward Andrew Matthews who kicked 44 goals in 2016 will be tough to match up on yet again. And former International Cup player Nathan Millar, who gets better and better each year, is back to torment the wings.It could be worse for the Gargs and their Canadian development approach will pay off in spades at some point.

This site uses Akismet to reduce spam. Learn how your comment data is processed.